Recently I haven’t really been reading novels and I thought I’d change that by adding light novels to the mix (my thinking is that since it’s anime related then it must be interesting, haha)!

So this week’s read was The Melancholy of Haruhi Suzumiya by Nagaru Tanigawa! Apparently, there are 11 volumes out but I’ve only just read the first. Also, I’ve yet to read the manga (I probably won’t the art isn’t to my liking) or the anime (I’m debating, part of me says yes another says no and no is kind of winning) 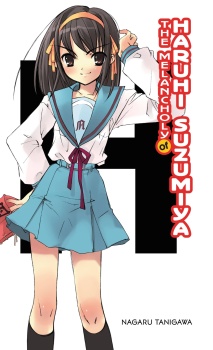 But what is this book about?

When Kyon starts high school he’s finally let go of childish thoughts of aliens, time travelers, ghosts, and demons being real and decides to live a normal life. Unfortunately, a single person has decided to make this impossible – Haruhi Suzumiya, the school weirdo that has no interest in humans and only wishes to meet supernatural beings such as aliens, time travelers, sliders, or espers. And thus, Kyon’s ‘normal life’ becomes a hectic one when Haruhi forms the SOS (Spreading Excitement all Over the World with Haruhi Suzumiya) Brigade, a club intent on finding supernatural phenomena, and appoints him the second official member!

I would rate this book a 2.5/5 ☆ because it was an interesting read, and considering it was anime-related I didn’t really expect the scientific jargon I found. It really made me think about the universe and how we (as humans) place ourselves in that universe. However, it did have its down times and the characters weren’t that great so I had to subtract points for that (it should not have taken me 3 days to finish a 200-page book, at most it should have been 1.5 days but I kept falling asleep).

While I wouldn’t recommend it to everyone, I will say it’s an interesting read. If you’re not fond of scientific talk (mostly astronomy), nonsense, and a predictable plot, then this probably isn’t for you.

I also wouldn’t reread this book. Could be passed up.

Our main cast, Haruhi in the middle

In terms of characters, I thought the cast was interesting (if you consider their true identities) but the way they were portrayed didn’t leave positive (or lasting) impressions.

We have the main character Kyon (this is actually a nickname and I have no idea what his actual name is) who is like your typical otaku who wishes for something extraordinary to happen but also knows that it’s pretty much impossible because the laws of the universe won’t allow it. The book is actually narrated by this guy and at times I thought the format of the book was interesting because we could hear everything his inner-voice would say and then there’d be a smaller sentence where we see what actually was said (of course, this could be confusing at times).

Then there’s Haruhi, your class weirdo who, regardless of what the universe dictates, is positive there’s something else out there and vows to find it. Out of all the characters, she’s the one with the most impact, though not exactly positive (in my eyes). What I didn’t like about Haruhi was how she was initially presented as really anti-human, but I thought, well whatever that’s fine. But then she turned into a harasser and I was just done. I completely disliked her for more than half the book and even at the end, I couldn’t really say I liked her.

There’re also other main characters like Asahina (cute airhead), Yuki (blank face book lover), and Koizumi (smiley transfer student) but I can’t really say much about them without giving up some of the plot…enough to say none of them really stood out (Asahina kind of did but only because she was the one who was usually harassed by Haruhi).

In terms of plot, I’m crossing my fingers for some kind of plot twist but it doesn’t seem to be going there…The idea is interesting however I’m not sure what I think about its execution. Like, it feels too simple and straightforward (´･_･`) The pacing seems decent (it’s not bad), even when you have different people suddenly confessing things to Kyon. I guess this takes away some of that surprise element and things start to get predictable.

I do have to wonder what about this could possibly be spanned into 11 books.